A crowd of more than 100 people ignored the heat and gathered beneath a giant red, white and blue tent last Saturday (June 18) to witness the dedication ceremony for the newly erected Cornelia Elmore Library Memorial and tribute to the woman whose name the site bears.
Event programs, made of card stock, doubled as fans as the heat slowly began to materialize on a day when the first triple-digit temperatures of the year were recorded. Thankfully, a gentle but steady breeze helped attendees bear the heat, which was mentioned several times during the ceremony.
“We know you’re fanning; we know you’re hot, but we’re going to get you out of here as soon as possible,” Mistress of Ceremony Gwen Frye told the crowd as speaker after speaker took the podium to speak
“Feel that nice breeze? Back when all this started, when I was just a kid, that’s the only air conditioning we had,” said Mayor Jim Staff, who praised the community effort that resulted in the memorial to Mrs. Cornelia Elmore, a noted educator who fought for, and gained, a library for the community’s black population. “This is fantastic; it shows what happens when all Atmore gets together. This will be here for a long time.”
The crowd included several descendants of Mrs. Elmore, including great-grandson Bill G. Elmore, who delivered the keynote address, two great-granddaughters, twin sisters Arralean Fisher Ellis and Barbara Fisher Webb, and great-great granddaughter, Dr Merryl Bland.
Also present were city council members Eunice Johnson (sister of James McNeil, who organized and oversaw the project), Jerome Webster and Mayor Pro-Tem Shawn Lassiter, as well as Municipal Court Judge Karean Reynolds, who also sits on the Escambia County Commission.
After Deitrick Lawson performed the National Anthem on his saxophone, the ribbon was cut to officially open the memorial, at which Mrs. Elmore’s name is prominently displayed in gold letters on the site’s white wall.
Barbara Poole Harris announced the occasion, telling the crowd the event was to “recognize, honor and pay tribute to the late Cornelia Elmore at this historical site.”
After Arralean Fisher Ellis introduced Elmore descendants who traveled from as far away as Ohio and as close as “just around the corner,” she read from her great-grandmother’s autobiography, then Lawson played “Amazing Grace” on his sax before the keynote speaker Billy Elmore delivered his address.
“I am so impressed that I had a great-grandmother who was so smart and so determined to do the right things to help us as black people,” he said of the honoree, who traveled by horse and buggy to teach school when she was the only black teacher in Monroe County. “I am honored to stand on behalf of the Elmore family to pay tribute to her life and legacy.
“From humble beginnings, Cornelia Elmore dared to dream a bigger dream, one bigger than anyone expected or encouraged her to have. She is a living, breathing success story. She eventually was named supervisor of all black schools, elementary, junior high and high school, in that county. I am proud to call her my GREAT grandmother.”
James McNeil, who received almost as much tribute as Mrs. Elmore, said God sent him a vision that led to the development of the historic lot, which had been ignored and was overgrown with weeds and grass when the project started.
His sister, Eunice Johnson, said prior to the event that her “baby brother,” the youngest of seven children, never does anything halfway
“He told me the Lord gave him a vision to do this, and it just happened,” the District 3 councilwoman said. “Whatever he does, he tries to do it with excellence. He certainly did that with this memorial.”
McNeil later handed out certificates of appreciation to those who worked behind the scenes to help him make his vision come to life, including brothers Tristian and Christian Brown, who parked cars and carried water and soft drinks to attendees, during the ceremony and “watched over” the property during construction.
“These guys are awesome,” he said.
After Bishop Wayne Johnson blessed the site, a series of “expressions” began, with person after person coming forward to praise Cornelia Elmore and McNeil.
Atmore Public Library Director Hope Lassiter, who worked with McNeil on researching Mrs. Elmore’s life, also spoke briefly.
“History can’t be forgotten,” she said. “This will be an honor to Mrs. Elmore’s life of service, and to her commitment to the community, forever.”
After Russell Robinson presented McNeil with a plaque commemorating his vision and hard work, the project organizer was joined by his three sons — James Jr., Terrance and Terrell — as he ended the ceremony with a bit of advice he had imparted to his sons when they graduated.
“This place, the library, attracted me so much when I was a boy, and I wanted to do something about that,” he said. “I asked the Lord to give me a vision, and this is the result. If you have a vision, something you want to do in life, ask God to show you and lead you.” 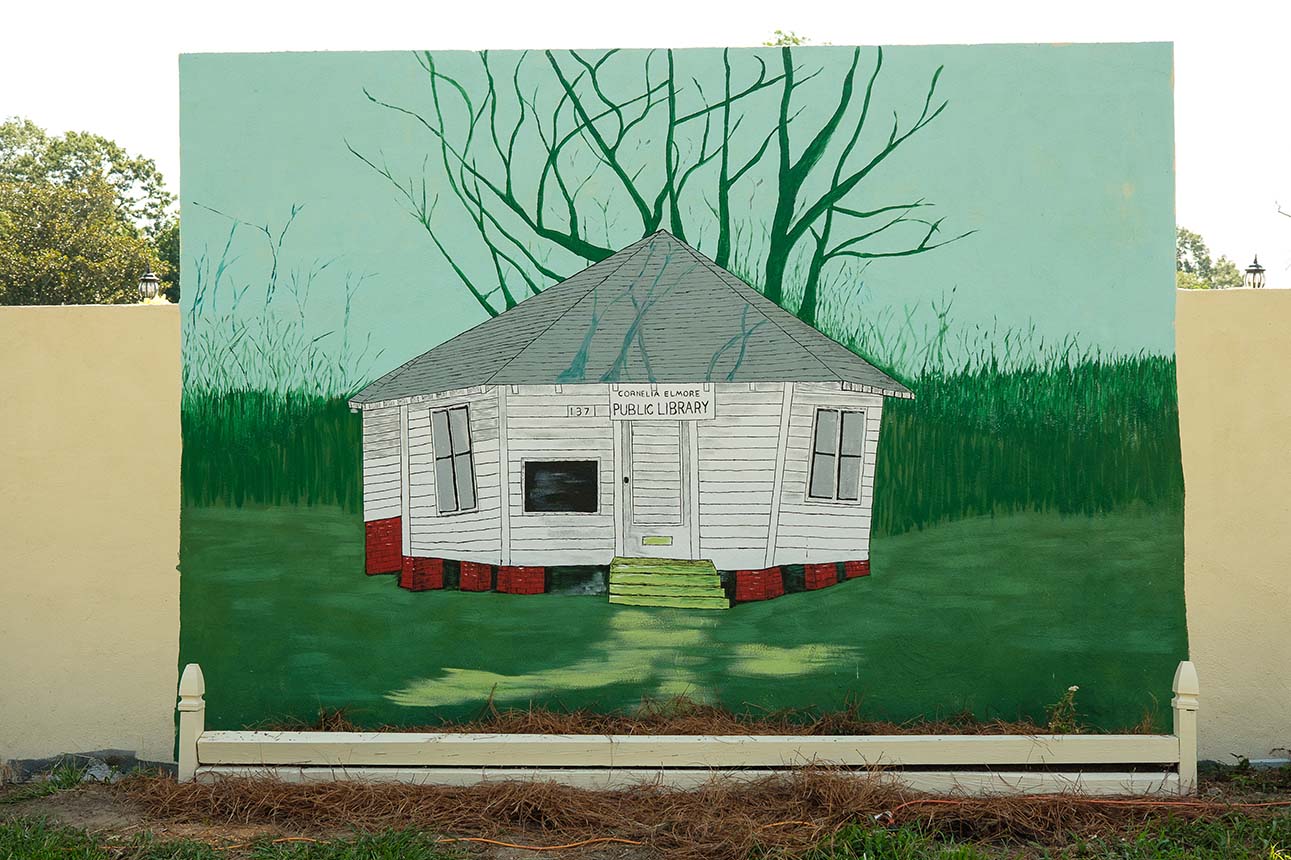