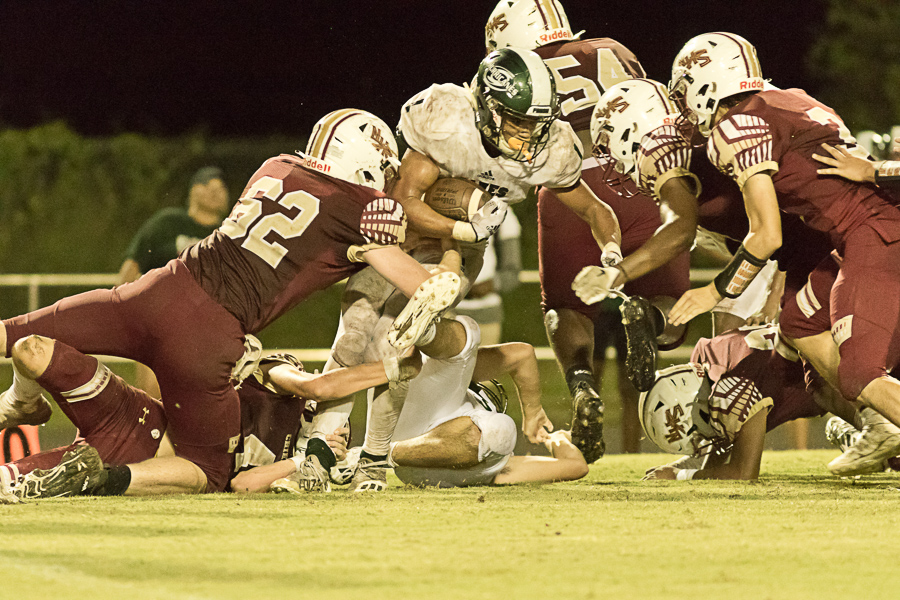 Last Friday night, August 26, the Northview Chiefs swept the Flomaton Hurricanes at their home stadium in Bratt, Florida, with a final score of 48-33. The stadium was nearly packed full with fans. People from both sides of the state line came out to support their teams. This was the first regular season game for the Chiefs, and they did not disappoint.
Starting off the very first play of the game, running back Jamarkus Jefferson scored, just as he predicted before the game.
“I told my coaches I was going to score the first play of the game” Jefferson said as he set the stakes high for this important game.
The Chiefs went for the extra point, and Brandon Ferguson’s kick was good bringing the score 7-0 early on in the first quarter.
Flomaton did not stay down for long though, and they answered with a touchdown. Unfortunately for the Canes, they did not get the extra point, bringing the score to 7-6. The Chiefs got the ball back and started off strong with a pass to Wyatt Scruggs, putting the Chiefs in the red zone. Quarterback Kaden Odom passed to Jefferson for another Northview touchdown. Instead of going for the extra point, the Chiefs decided to go for two, but did not get it, making the score 13-6.
Flomaton retaliated with another touchdown, bringing the score 13-12 at the end of the first quarter.
In the beginning of the second quarter, the Flomaton Hurricanes scored again and gained another extra two points, making the score 20-13. Not staying down for long, Luke Bridges ran in a touchdown. With Ferguson making the extra point, the score was tied at 20-20 making it a tight ballgame. Wanting to get back on top, the Canes scored again and got the extra point making it 27-20.
With the time ticking down until halftime, Northview’s quarterback decided to run the ball in for a touchdown, tying up the game yet again. The score was 27-27 going into halftime.
The Chiefs scored early on in the third quarter with a touchdown by Jefferson. Ferguson kicked the extra point, and it was good, bringing the score to 34-27. Flomaton got the ball back, but not for long. Odom intercepted the Canes’ pass, getting the ball back for Northview. Determined to get more points on the scoreboard, Jefferson ran it in for his fourth touchdown of the night. Ferguson’ kick was good yet again, making the score 41-27.
The Canes got the ball back, but didn’t keep it for long. With a fumble recovery from Moses Delarosa, the Chiefs got the ball back. Odom passed the ball to Scruggs for a first down. Shortly after, Odom ran the ball in from inside the red zone for the last Northview touchdown of the night, and with the extra point, the score was now 48-27. Right after, Flomaton’s quarterback Will Smith, passed a 64-yard touchdown to the Canes’ number nine, making the final score 48-33.
This was a huge win for the Chiefs because the rivalry between Northview and Flomaton goes back for years. Not only were fans ecstatic, so were Chiefs’ players! Quarterback Kaden Odom said, “I really felt going into the week we were going to come out on top! Me and the guys had a chip on our shoulder going into the game especially after getting beat by them last year for the season opener. With one of the biggest crowds I’ve played in front of at Northview, we were able to fight through some adversity and come out on top. We have a long road ahead of us, but it’s going to be a great year to be a Northview Chief!”
The Chiefs have been focusing on this game since the beginning of summer, and they have been working very hard to have an impressive season this year. Jamarkus Jefferson added, “We’ve been preparing for this game since summer. It’s been a while since Northview beat Flomaton, and it felt good to end that losing streak.”
When asked about how it feels to be a senior on this team he said, “This year is special because it’s my last ride, and for a lot of players this is our make or break season.”
The Chiefs have a great season ahead of them, and fans cannot wait to see what’s in store for them! Be sure to continue to come out and support your Northview Chiefs this Friday night at Lighthouse Christian in Pensacola. You will not be disappointed!