Veterans of America’s longest, bloodiest and most controversial conflict, a group that was shunned by many Americans when they returned from the war-torn country in the 1960s and 1970s, were honored locally on March 31.

Atmore Memorial VFW Auxiliary to Post 7016 hosted for the fifth straight year a program to show local veterans who fought in the Vietnam War the respect they were denied more than 40 years ago.

The special ceremony, held at Atmore Area YMCA, opened with the recorded strains of Armed Forces Radio deejay Adrian Cronauer’s “Good morning, Vietnam” greeting, which was heard in military bases across South Vietnam during the war, and closed with a performance of “Tie a Yellow Ribbon (Around the Old Oak Tree)” by aspiring country musician Zachary Thomas Diedrich.

In between were words of praise and appreciation from VFW Auxiliary members, local governmental officials and the event’s keynote speaker, State Rep. Alan Baker.

“Those who served in Vietnam are some of America’s finest, and we owe them tremendous respect,” Baker said during his address to a crowd of more than 60 veterans, auxiliary members and guests. “I am ashamed of some of the actions of some Americans during that era. Vietnam was an unpopular war, but those who served in Vietnam are deserving of honor and praise in sustaining our nation through a most difficult and trying era.”

Speaking directly to the 21 local veterans in attendance, the state lawmaker expressed his feelings that each deserved much more than he or she got upon returning from the war.

“You are unsung heroes,” he said. “All Americans owe a debt of gratitude to each of you for the service and sacrifice you provided.”

Baker talked about the freedoms upon which the country was built, then asked each of the veterans to stand, after which he walked to each one and shook hands before returning to finish his address, which included a belated greeting.

Atmore City Councilwoman Susan Smith and Mayor Jim Staff also spoke to the gathering. Smith read a brief history of American involvement in the conflict, while Staff read a proclamation designating the last Saturday in March each year as Vietnam Veterans Day in the city.

Last year, President Donald Trump designated March 29 as National Vietnam War Veterans Day. That date in 1973 marked the evacuation of the last remaining American military and government personnel from Saigon, which was under assault by North Vietnamese and Viet Cong troops at the time.

The local observance included tables decorated in red, white and blue, along with a three-tier cake, topped by an eagle figurine, and cupcakes also decorated in the national colors. The baked treats were furnished by Dawn Gilmore of Bay Minette.

One of its most touching moments came during the presentation of the POW/MIA flag (by Jenny Hutto), the American flag (by Claude Odom), the Alabama state flag (by Jackey Odom) and the VFW Auxiliary flag (by Mary Alice Stewart).

As Odom proceeded to the front of the room with the national banner, Diedrich played a ringing, half-tempo version of “The Star Spangled Banner” on his acoustic guitar.

A special thanks was given to five members of J.U. Blacksher’s Jr. Civitan Club, who helped set up the chairs and tables. The members are Katelyn Carnley, Noah Graham (who is state governor), Rachael Williams, Harli Petty and Hannah Hall.

After the ceremony, the veterans mingled with auxiliary members and guests as Mitch Harrelson played a mix of rock and pop songs from the Vietnam era.

Click below to view our photo gallery from the event 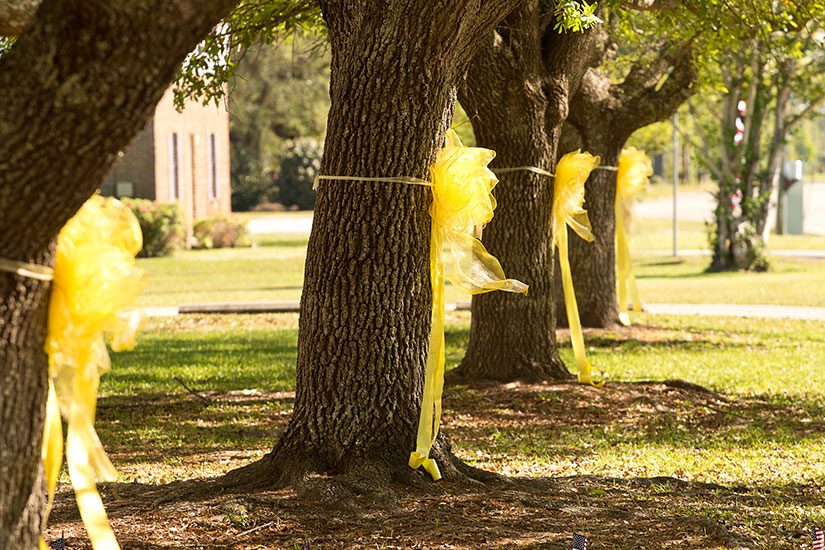