Two Frisco City women — one of whom was later transferred by helicopter to an area trauma center — were seriously injured March 1 when the vehicle in which they were traveling was struck broadside by a loaded school bus.

According to Atmore Police Department reports, the driver of a 1999 Ford Taurus, 66-year-old Maxine Smith and a passenger in the vehicle, Mary Owens, 77, were hurt in the crash, which occurred around 3 p.m. when the Taurus pulled onto Main and was struck by the oncoming bus.

The crumpled car, a Ford Taurus, wound up teetering unsteadily in a ditch in the yard of Johnson Quimby Funeral Home. The Ford’s windshield was shattered and its passenger side was crushed. City firefighters had to employ a strut to stabilize the car before they could remove the passenger-side door and rescue the women.

Police arrived to find “two occupants trapped inside the vehicle but conscious.”

Reports show that Smith was knocked into the passenger seat, where she landed atop Owens. Both were taken by ambulance to Atmore Community Hospital, from which one was later flown by a Medstar chopper to the undisclosed medical center.

Reports did not specify which of the women was hurt badly enough to require the transfer.

Initial reports were that the car was afire, but those reports were apparently fueled by smoke or steam that emanated from the engine compartment after the Taurus was struck by the bus.

Beth Drew, Assistant Superintendent of Education for Escambia County Schools, said at the scene that none of the children were hurt, except for those who, according to Atmore Fire Department reports, suffered “minor bumps and bruises.” The bus driver, Sharon Rose, was taken by ambulance to ACH for examination and observation.

The bus passengers were reportedly students at Rachel Patterson Elementary School, and Principal John Brantley was also at the wreck site. The children were transferred to a second bus as police talked with witnesses and worked on reports.

Click on the image below to view our galleries of photos from the collision: 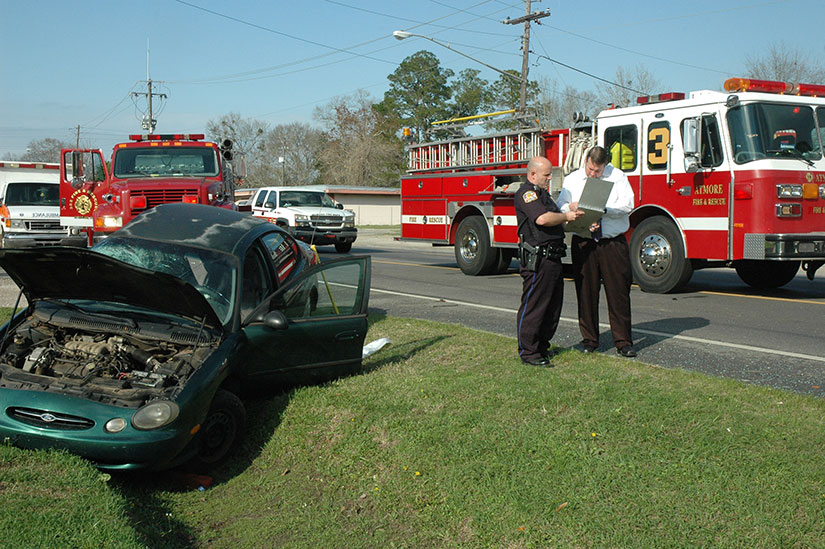