Fewer than 100 individuals were drawn to the park by the smells that emanated from cauldrons of bubbling concoctions consisting of various meats, light and dark beans, an occasional vegetable and peppers, plenty of peppers. And each vat of spicy stew also contained at least one “secret ingredient” that was not revealed.

“I could tell you what the secret ingredient is, but then I’d have to kill you,” laughed Robbie Cale, a member of Atmore Community Hospital’s team.
Those who did attend the event were treated to tastes of 12 different chili recipes, some that would please a child’s palate and a couple that almost burned through the Styrofoam cups in which the samples were served.

Attendees were also treated to a couple of hours of fellowship, as individuals laughed, chatted and reconnected with friends old and new as Richard Bowen provided a musical backdrop with his acoustic guitar and the songs of Cat Stevens, the Eagles, Pink Floyd and others.

Toddlers ran across the park’s central area, their parents or grandparents in hot pursuit, and older children ignored the culinary competition to play chase, climb trees and partake of other youthful activities.

When the judging was done and the chili pots running low, Atmore Advance’s creation was declared the winner. Carl Butler, acknowledged as the team’s chief chef, said the secret to his success was a simple one.

Angela & Company was named runner-up in the chili competition, and the team’s Chili Bar was voted Best Decorated booth. Angela Leachman gave the credit to her husband, Jarrod.

“I just know I married an awesome cook,” the hair stylist said. “He cooks, I clean.”

Jarrod Leachman said he couldn’t reveal the component that gave his chili its winning taste, mainly because he didn’t know.

Johnson Ford’s Lawrence Byrd said his team’s finish did little to diminish the main reason for being there.

Awards were presented by Mallorie Beachy, Brandy Giger, and Jordan Barnett, representing the Chamber of Commerce. 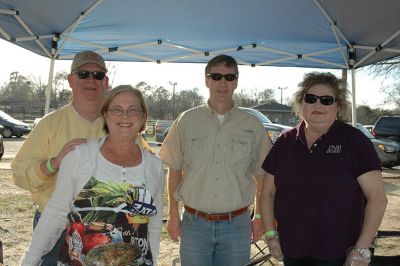