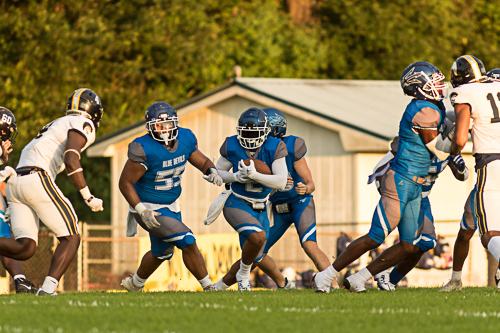 Lorenzo Arnold hauled in an 8-yard pass from Dakota DeSpain with 14.5 seconds to play in regulation to complete a fourth-quarter comeback and lift Escambia County High to a 21-14 win over Cottage Hill in the team’s season opener last Friday, August 19.
Coach Vincent Harris, making his head coaching debut, said the primary keys to the win were the hard play by his defense throughout the contest, a second-half awakening by his offense and the way the coaching staff did its job.
“I was very pleased with how my team played and my coaches coached,” he said. “I thought we had an extremely good effort. I hate the fact that it took the better part of three quarters for us to get rolling. (Cottage Hill’s) defense held us down for a long time before we could really get things rolling.”
The underlying key to the win came in the fourth and final period, when the well-conditioned Blue Devils stuffed most everything the tired Warriors offense threw at them and finally began to move the ball with little resistance against a worn-out Cottage Hill defense.
“Cottage Hill is a tough football team, and we won that football game because we were fresh,” Harris said. “I tell our players in practice that conditioning matters, and I felt like our conditioning was the difference. We still had a lot of gas left at the end. We could have played a couple more quarters if we had to.”
He also noted that the timing of his team’s scoring wiped out another factor that had plagued the team in past seasons.
“One thing I saw that was missing last year and in years past, was that Escambia County couldn’t win the close games,” he said.
Before what was reportedly one of the largest crowds to attend an ECHS game in several seasons, the Blue Devils seemed destined to take an early lead. But it wasn’t to be.
Mostly behind the running of James Whatley, along with a 10-yard pass completion from DeSpain to Jovaughnta Henderson, ECHS took the opening kickoff and drove from its own 41-yard line to a first-and-goal at the Cottage Hill 8. The drive stalled there, though, when Whatley was stuffed for a 2-yard loss and DeSpain had a pass batted down, then overthrew open receivers twice in the end zone.
Harris said he would write off the young field general’s shaky start to first-game jitters.
“Whatley ran the ball pretty hard, and Mason Huggins did a good job in the backfield,” he praised. “Dakota did a good job once he settled down. We were in the red zone about four times, but he was overthrowing some wide-open guys. We’ll say it was just opening-game jitters. He’ll be fine. I wish we had been able to help the defense early, but I think in the future we will be an exciting team to watch on offense.”
Harris also praised Arnold’s two big catches, as well as the play of the offensive line.
“Those two (touchdown) catches by Lorenzo were clutch; they were huge,” he said. “Our offensive line really got off the football and tried their best to block and do things right. Those were some big boys they were blocking.”
Place-kicker Luis Garcia calmly split the uprights with his PAT kick to account for the final score.
Most of the coach’s praise was for the defensive effort against a Cottage Hill team that boasts at least four Division I prospects.
He singled out two Blue Devils defensive backs for special recognition — Lebron Hooks, who picked off two passes, including one he returned 78 yards for the tying score, and Marrion Hooks, whose first-half interception took some of the starch out of the Warriors offense.
“I thought our defense really did a great job,” he said. “Being able to stop the run like we did was really big, and our secondary was tremendous against some Division 1 football players. For us to be with them and play, that shows there’s some talent in Atmore.
“Lebron Hooks showed me he is a play maker. The interception he took back for the touchdown that tied the game was a huge momentum booster. It was the turning point of the game. Marrion’s interception was also a big play for us.”
He added that the crowd was a huge factor in the win.
“I am very pleased with the fans; I want to thank them for showing up,” he said. “I understand that was one of the biggest crowds in the last few years. The support we’ve had has been amazing.
ECHS will have this week off before hosting Satsuma on September 2 in the team’s Class 4A, Region 1 opener.